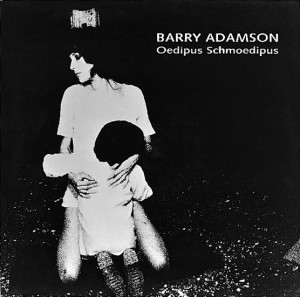 Mute releases a limited edition run of Barry Adamson’s 1996 album, Oedipus Schmoedipus, featuring collaborations with Pulp’s Jarvis Cocker (‘Set The Controls For The Heart Of The Pelvis’), Nick Cave (‘The Sweetest Embrace’) and Billy Mackenzie (‘Achieved In The Valley Of Dolls’). This record explores the ‘Oedipus Complex’, with Barry describing it as "... a sexual psychoanalytical journey examining mother and son relationships in a somewhat humorous, yet dark way.”

Since lending his talents to Magazine and Nick Cave and the Bad Seed, Barry Adamson has released a series of solo albums ranging in different musical genres. Viewed as the finale of an “unconscious trilogy” following ‘Moss Side Story’ and Mercury Prize nominated ‘Soul Murder’, Oedipus Schmoedipus showcases its composer’s embrace of various styles, moving between ambient electronics, cool jazz and elements of hip-hop.

Laura says: Possibly the coolest Mancunian ever. Set The Controls For The Heart Of The Pelvis, featuring the inimitable Jarvis Cocker at his seductive best, kicks off this exploration of the Oedipus Complex. It's a brilliant amalgamation of jazz, electronica, cinematics and hip-hop and along with the afore mentioned Jarvis, it also features guest vocals from the sadly missed Billy Mackenzie and of course Nick Cave. Along with his epic pseudo soundtrack, Moss Side Story, this is a hugely underrated Manchester LP.