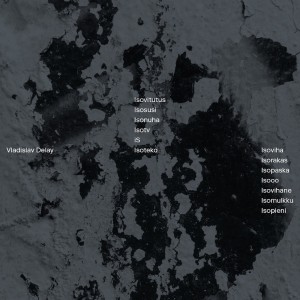 Isoviha was recorded four years ago, inspired by ideas that Sasu Ripatti (aka Vladislav Delay) had been reflecting on for a long time. This album is a counterpart to his two Rakka albums which were a personal reflection on the nature and sound-world of the northern Arctic wilderness, 1000 kilometres north of where he lives on the Finnish island of Hailuoto. It's an area he loves to explore, trekking out alone to enjoy its rugged power. However the sound world of Isoviha is a return to man-made civilization. Musically Isoviha presents a more complicated world than Rakka; overloaded and unpredictable, audio archaeology that layers and juxtaposes everyday sounds into intense sculptures of noise and drone. As a musical observation internally and externally, it's influenced by the heightened anxious intensity Sasu feels when returning from the empty wilderness. The ratcheting up of urban noise on Isoviha is built with insistent loops that seem to malfunction the faster they spiral and the dangerous overwhelming potential of ordinary objects and events: shimmering, hammering, crowds, radio distortion, ancient backfiring engines. It's hypermodern musique concrète, married to a jazz drummer's intuitive sense of rhythm. Going back even further in time but still tethered to the local, Isoviha also means 'the great wrath' and refers to a time in Finland under Russian occupation in the 1700s. A time when all the Islanders of Hailuoto were killed, apart from a single couple who were left to bury the dead. As if time is non-linear, the response to toxicity and madness that drives the album feels even more appropriate now than when it was written four years ago and confirmation that the horrors of the past still darken the present.