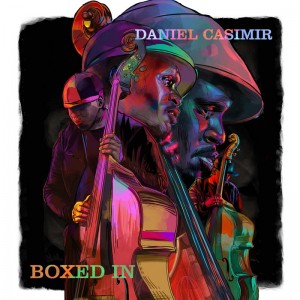 Boxed In represents Casimir's debut set of compositions written for orchestra. Despite his interest in writing for orchestra while studying jazz and classical music, attending conservatoires and completing a masters degree at Trinity Laban, he was never given the opportunity or choice to fulfil his aspiration. Casimir notes that as only one of two black musicians in his study cohort the normalisation of the situation made it almost easy to miss its inherent injustice.

Coming up through the essential development foundation Tomorrow's Warriors, Casimir has gone on to feature on all of Nubya Garcia's recorded output to date as well as projects by Makaya McCraven and Ashley Henry and has performed with Lonnie Liston Smith and Jason Rebello amongst others.

This album reflects the experiences of navigating prescribed labels traditionally placed on black musicians. As well as being inspired by Wayne Shorter's hybrid orchestral jazz projects, Boxed In was also influenced by a conversation Casimir had in 2018 with legendary composer and producer Quincy Jones who talked a lot about classical music orchestration.

The album is also inspired by Derek Owusu's book Safe which reflects on the Black British male experience and becomes the broad thematic skeleton of Boxed In with the track Safe split into three parts across the album, the first of which opens proceedings in a purposeful up-tempo style with stylistic touches of Roni Size-esque drum & bass (in part courtesy of producer/polymath Moses Boyd). The album's title track follows, with Garcia's soaring tenor taking lead, followed by New Waters and the introduction of vocalist Ria Moran.

Flute, woodwind and brass melodies envelop Casimir's charming string arrangments on Your Side and Safe Part 2, showing off Casimir's command and ease in an orchestral setting. Get Even and Rewind The Time confirm Casimir's penchant for weaving brooding pop vocals with jazz composition while the fanfaric Into The Truth leads literally into The Truth where Copus and MacSween engage throughout to the track's triumphant close.