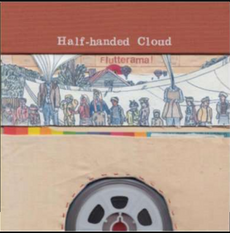 The album’s tape-fiddled tunes - recorded on the very same 16-track recorder last serviced by a sound technician who also worked with The Beach Boys in their home studio - employ surprisingly little synthesizer (“it felt like cheating,” says Ringhofer) - he preferred to craft most of the album’s effects the long way, frequently going behind the back of rock instrumentation by hand-feeding ½” magnetic reel recordings of chord organs, deflating balloons, some guitars, piano (occasionally tracked with a baby on his lap), brass, tablecloth swipes, and a quickly-cranked half-speed music box. He was assisted by long-time Half-handed Cloud contributor Brandon Buckner on drums, and single song backing vocals from Anacortes, WA songsmith John Van Deusen.

Bustin' Stronghodes
Trickmonks
Swallowing The Water You Walk On
Can Shadows Praise You?
The Netherworld Squints At The Sight Of
You
Trick Leash
Anamnesis
Asking For Fish
I'm The Weakest Link
Under Your Breath
Handles 01:52
What's Illumined Becomes Visible
Someone You Can Use
About Face
Periodically Yours
We Won't Survive This
Project Yourself Alive Onto My Corpse
We Belong To You, But How Now Is Soon?