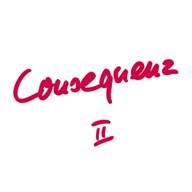 Composer and conceptual artist Conrad Schnitzler (1937-2011) was one of the most influential figures of the electronic avant-garde in Germany. In 1967/68, the Joseph Beuys student founded the Zodiak Free Arts Lab, which became a playground for Berlin subculture. In addition to numerous solo releases Schnitzler was also involved in various band formations not least Tangerine Dream and Kluster. Representing another of his musical landmarks are the 'Consequenz' releases. 'Consequenz II' emerged from a collaboration with Wolfgang Seidel alias Wolf Sequenza, and is the follow-up project to 'Consequenz' which was a low-budget production that had an overriding aim of liberating music from its elitist circles in a 'Beuys-ian' sense. 'Consequenz II' returned to the theme with electronic apparatus that professionalised the sound but by no means reduced the fun he found in experimentation.

"There are no secret devices. ERUPTION are proof of that" - thus read the claim on an early 1970s flyer for Conrad Schnitzler's band Eruption, the group he started after splitting from Dieter Moebius and Hans-Joachim Roedelius, who persevered as Kluster, and later Cluster.

Schnitzler had studied sculpture under Joseph Beuys and the statement echoed his teacher's philosophy: "Everyone is an artist." The flyer continued in similar vein: "ERUPTION are freeing the prisoners from their ivory towers." Schnitzler viewed art as social practice, not the realm of specialists. Anyone could get involved. You didn't even need to be able to play an instrument. The flyer also announced: "Members of the audience who bring transistor radios will get reduced admission if they play music on their radios inside the venue."

That was back in 1971, ten years before we produced and recorded the Consequenz LP. We included instructions inside the sleeve for setting up just such a project with the minimum of technical fuss, inviting submissions which used the record as a playback tool. One cassette arrived all the way from New York, but that was about it. Not really enough to satisfy our ambition of liberating artistic endeavour from the ivory tower (perhaps not so much of a surprise, considering we only pressed a hundred discs). We had almost resigned ourselves to life in the ivory tower when a letter from a Spanish label (Esplendor Geometrico) reached us, asking for a sequel - Consequenz II. It didn't take long for us to decide to accept the offer, encouraged by the fact that we would not have to finance the release out of our own pockets - as had been the case with the first Consquenz.

Certain "secret devices" had materialized in our ivory tower in the meantime. Conrad Schnitzler had purchased an 8-track recorder with money he had earned from "proper" art. I borrowed various bits of equipment from my band - Populäre Mechanik - including a drum computer, so we could really let rip. The little songs we made sounded much more "professional" than the cheerfully low budget music of the first Consequenz. I'd taken days off work for the sessions and after a week we had enough material to fill one side of an LP. The last track was further evidence of Conrad Schnitzler's sense of humour, as previously revealed on our "pop"album CON 3 (1981) and the "Auf dem schwarzen Kanal" single (1980). "España" on the A-side of Consequenz II is a vocal collage of the words "Buenas Tardes" and "España".

All we needed now was music for the B-side, but our enthusiasm for the borrowed drum computer had waned somewhat. It was always the first track we recorded, which meant that everything else had to follow its lead. The beat itself was singularly unimpressed by what came next. This was an unsatisfactory state of affairs for two players (musicians?) who had begun with free improvisation, with either of the participants able to change the direction of the whole thing. Unsatisfactory, in spite of the fact that I was able to play to the beat with perfect timing, which led Conrad Schnitzler to give me the nickname "Sequenza" (hence the Consequenz title). The natural division of an LP into an A-side and a B-side lends itself to a caesura when the disc is flipped. So we decided to return to free-floating sounds on the B-side and, listening back now, I'm glad we did. Instead of competing with each other, the two sides dovetail perfectly.