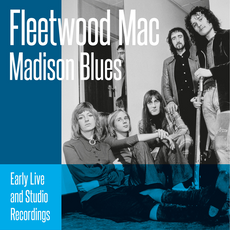 Fleetwood Mac made it big twice over: first as young kings of the late 1960's British blues boom – blues fanatics who nonetheless made the pop charts with a batch of memorable songs penned by founder Peter Green.

Then secondly, as the band that with its Rumours album Californian line- up, tapped into a whole new market in the mid-1970's which became known as AOR - adult oriented rock.

The music here is from a pivotal eighteen months in Mac's history as it lost its original if- it- ain't- blues- we- don't- wanna- know attitude and looked to its own songwriters - and America's West Coast sound - for inspiration.

After Peter Green's exit in May 1970 the rest of the band bravely decided to carry on as a 4-piece, and so rented an oast house called Kiln House to try and 'get it together in the country. Christine McVie joined, and one of the stand-out songs, 'Station Man', would endure for Mac in the bleak years before they moved to California in 1974 where they struck gold with their eponymous white album and then Rumours. 'Station Man' eventually found its way into the live set-list of the Buckingham/ Nicks line- up and listening to it again here you can hear why: in there, as far back as 1970, are some trademarks of the Rumours sound: threevoice harmonies, in- song tempo changes and ringing guitar sounds. Similarly, 'The Purple Dancer' and 'Jewel Eyed Judy' showcase a vocal harmonies and melodic sense of things to come for Fleetwood Mac many miles down the line.