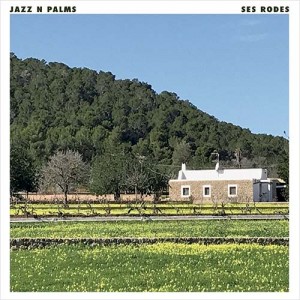 Ses Rodes is the new concept double album by Jazz N Palms for the brand-new label, Jazz N Palms Recordings. This is a lush instrumental project inspired by a move to the legendary Mediterranean island of Ibiza and the album art shows a house from the north of the island that typifies its famous architecture.

Ibiza might be known as the party capital of the world but it also has a silent and ancestral side that is sweet and slow. It's surrounded by beautiful nature and rhythms, and that is what has made artists and adventurers fall in love with the place ever since the 1930s. This new double album is dedicated to that way of life, which has remained almost unchanged till the early '80s. It is presented as a cartesian grid of Space-Time - one record is about space and the environment with tracks Mar, Playa, Bosque and Cielo meaning Sea, Beach, Forest and Sky, and the other follows the times of the day on tracks Mañana, Mediodía, Tarde, Noche, meaning Morning, Midday, Evening, and Night.

The Jazz N Palms label and producer is Riccio, who has put out a series of promotional edits on vinyl and cassette during the last three years. Ahead of conceiving this album, he met one of the youngest and most talented musicians of the island at a jazz night at the famous Pikes hotel and the pair went on to work together here. The resulting hour of music is inspired by the jazz-fusion of the late '70s, offered up in a contemporary way and was recorded in two sessions between the winter of 2020 and the spring of 2021 at Magrana Studios, where several rock bands have recorded since the early 2000s. It was mixed by island resident Ben Westbeech and Riccio.

The album kicks off with lush and breezy jazz-funk stylings and takes in lively lounge sounds, blissed-out downtempo, sunny broken beat and late-night synth laced beats that are perfect for open-air dances, cocktails on the terrace or grown-up discos.

This is a timeless album of great musicianship that taps into a very different and superbly soothing side of Ibiza.

Matt says: The mighty fine Jazz N Palms label have been gifting us some choice 12"'s for the last couple of years. Here they mature to a full length offering, losing none of the quality of the way. Inspired by a recent move to Ibiza; this is a Pikes-side collection for the more refined patron of the party island.