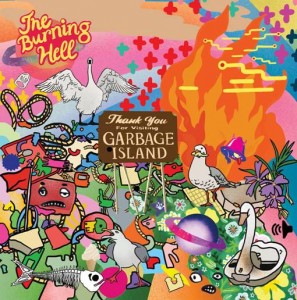 Whatever aspect you might like about these DIY Indie Pop Superheroes, you'll find it here, just a little bit more. Garbage Island, The Burning Hell's newest album, is a danceable romp through a fractured landscape of apocalypses near and far, celebrations of failure and escape, a dense medley of pop culture references, and plenty of birdlife. It will be released on June 24 2022 on BB*ISLAND and the band will spend much of the autumn and winter touring it through Europe, North America and Australia. Along the way, the album narrates both the need for action and the joys of refusing the hustle, imagines a futuristic nostalgia for the days of post-apocalyptic touring life, celebrates escape and solitude, and concludes with the hesitant suggestion that the end of the world can't last forever. The songs feature the omnivorous genre- bending and rapid-fire surrealist lyricism the band has been known for in the past, but while there is humour and playfulness in abundance, there are few jokes. It's either the darkest record The Burning Hell has made, the most reassuring, or the most fun. It might be all three.

"Making a record about a future world of disintegration and renewal while the real world seemed to be collapsing around us felt right." say Mathias Kom.

The Burning Hell is the ongoing musical project of songwriter Mathias Kom and multi- instrumentalists Ariel Sharratt and Jake Nicoll, often including additional comrades and collaborators. Their densely populated genre-shifting songs are packed with an abundance of literary, historical, cultural, and pop-cultural forebears, heroes and villains, subjects and objects, stories and hooks. They move with heavy rhyme and a light step, incorporating a frequent fixation on apocalypse and ruin into work that celebrates participation in a surprising, delightful, and even occasionally beautiful world. Which is to say they're good dance partners and they want to dance with you. The Burning Hell are DIY in the best possible sense-underlining the "Do"- affirming a commitment to the political power of sharing music. It is a profoundly optimistic gesture, by way of killer tunes, exuberant hooks, and joyful live performances.