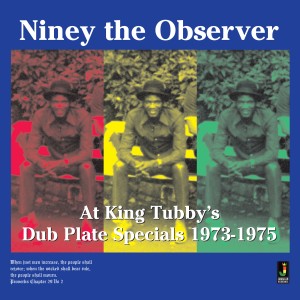 Winston ‘Niney’ Holness, A.K.A. The Observer must be one of reggae’s finest Roots Rebel producers. Capable of making some of the heaviest, innovative music, not only in sound but also in the Cultural/Political sense. Born George Boswell, Montego Bay, Jamaica,1951, and name checked ’Niney’, due to losing a thumb in a workshop accident. He began his career in music by organising bands to play at school dances. But his first steps learning the musical ropes came working under the tutor ledge of producer Bunny Lee around 1967, organising sessions for Bunny’s stable of artists. He moved on to work alongside Lee Perry at Joe Gibb’s ‘Amalgamated’ label setup, where on Lee Perry’s leaving in 1969 to start his own ‘Upsetter’ label, Niney became chief engineer.

Inspired by Perry’s success it wasn't long before his own ‘Destroyer’ label was under way. It was 1970, and his first production entitled ‘Mr Brown’ by DJ’s Dennis Alcapone and Lizzy, proved to be a minor hit, but his own ‘Blood and Fire’ track released in December of that year would become a major hit. After initial problems with it’s likeness to Bob Marley’s ‘Duppy Conqueror’, being ironed out, it’s reissue on his now named ‘Observer’ label, saw it go on to become, Jamaican Record of the Year 1971. Far out selling Bob Marley’s track to the tune of over 30,000 copies in Jamaica alone. A roots classic...

Niney's reputation for building great roots tracks, was furthered with more success working with singer Max Romeo. Issuing cuts such as 'Beard man Feast', the great 'Reggae Matic' and 'Aily and Ailaloo' and renewing his relationship with Lee Perry on the track 'Rasta Band Wagon' who's production credit read Perry, Niney, Maxie. In 1973, Niney began working with Dennis Brown, who was already an established star from an early age, they found a chemistry that went on to produce some of Dennis's finest work.The 1973 hit 'Westbound Train' was followed in 1974 by 'Cassandra', 'I am the Conqueror' and the timeless 'No more shall I Roam'.Another important connection around this time was the great King Tubby who Niney would take his tapes along to and even record some of his tracks at Tubby's house, 18 Drummlie Avenue, Kingston, which doubled as his Studio of Dub.

It's these tracks that we are concentrating on here, Tubby would strip the tracks back to the bone and rebuild them sometimes leaving off the hook line. Weather that be the horn line or keyboard line and adding effects over the top that could disguise the cut even more. Even Niney stating that when Tubby had finished with a cut, he found it hard to recognise the track himself.

It's these tracks as dub plate specials that Tubby would play on his Hometown HI - FI Sound System and it's these such tracks that we have compiled for this release. Dub Plates that have not seen the light of day since tragically the great Osbourne Ruddock A.K.A. King Tubby was gunned down and murdered on the 06th of December 1989. For a few dollars and a gold chain, reggae music has lost one of its most inventive, creative forces.

Niney also cut tracks with many other reggae giants, Gregory Issac's, Michael Rose, Junior Delgado, Horace Andy, Delroy Wilson to name but a few. As in house producer at the legendary Channel studios and supervising sessions at Dynamic and Randy's Studio17, his magic touched many. DJ, Arranger, Producer, his Roots Rebel Music still stands the test of time.