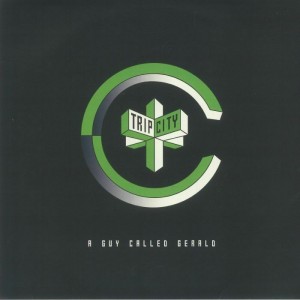 A Guy Called Gerald’s soundtrack to Trevor Miller’s Trip City novel was originally released in 1989 on cassette bundled with the book. It went on to sell 12,000 copies in a year before becoming an underground cult classic.

Reissued in 2021 on vinyl for the first time as part of a bundle with the book, the vinyl is now available to buy on its own.

In the summer of 1989, when Trevor Miller’s Trip City book was first released with a five-track cassette EP by A Guy Called Gerald, there had been no other British novel like it. For 2021, Trip City came back and the original soundtrack by A Guy Called Gerald was also reissued on vinyl for the first time as part of a bundle with the book. Now the vinyl is available to buy on its own.

“I remember back in the 80s, in my hometown, Tony Wilson (of Factory Records fame) was fond of calling Shaun Ryder the WB Yeats of his day. In that vein, whether or not I like to see myself in the canon of Anthony Burgess and Clockwork Orange - with these five tracks, A Guy Called Gerald feels very much like the Ludwig Van to my Alex DeLarge.” Trevor Miller

“Coming on the heels of the acid house classic “Voodoo Ray”, the cut-up vocals, driving bass and hand claps of “FX” and “Trip City” blurred the line between the fictional Tower club and its real-world counterpart The Limelight. This reissue further blurs the lines between past and present, memorialising those heady times of the Second Summer of Love that anyone invested in the counterculture, much like Valentine, can’t afford to forget.” The Wire.

“The EP comprises five acid rollers that showcase his transition into the world of sampling, with the title track functioning as the main theme.” The Quietus.