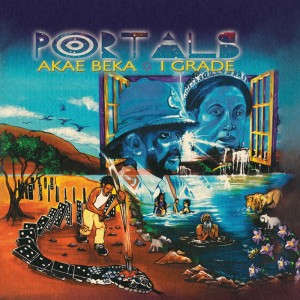 Akae Beka's inimitable style, developed over decades performing with St. Croix based band Midnite. At the point of his untimely passing in 2019, he had released over 70LP's. His prolific output coupled with his uniquely rich, deep, multilayered songwriting and uncompromising devotion to RasTafari has earned him a place amongst the reggae legends.

The production trinity, Zion I Kings have been involved collectively and individually in co-creating some of the most highly regarded contributions to the vast Akae Beka catalogue.

Now available on 12" vinyl courtesy of Before Zero Records, Portals was originally released on CD and Digital in 2016. It garnered critical acclaim and held position in the billboard charts top 10 for 2 weeks. Produced collaboratively between Zion I Kings and Vaughn Benjamin (Akae Beka), who co-produced & arranged 5 of the 13 songs himself, alongside the ZIK players in St. Croix's Aqua Sounds Studio. The album's sound continues a trajectory of textural, guitar-driven roots reggae that Zion I Kings and Padraic Coursey first explored on the track "Weather the Storm" on 2014's Beauty for Ashes.