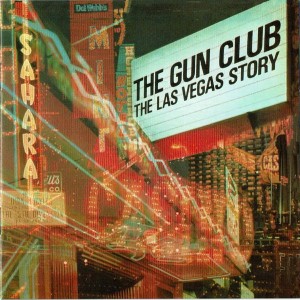 Blixa Sounds release a deluxe edition of The Las Vegas Story, the classic 1984 album by punk rock legends The Gun Club - This Deluxe Edition includes a second LP of the unearthed 1984 concert at Scorgie's in Rochester, NY, and a download link to previously unreleased footage – 1984 Home Movie: The Gun Club On The Road.

The Las Vegas Story has been digitally remastered and comes in beautiful gatefold packaging. The Deluxe Editionof this classic 1984 album features extensive liner notes written by Gun Club members Terry Graham, Kid Congo Powers, and Patricia Morrison, as well as guest musicians Dave Alvin, Phast Phreddie Patterson, and producer Jeff Eyrich. The LP includes gatefold packaging and printed sleeves that feature rare Gun Club photography. This classic line-up only stayed together for this one album, featuring original drummer Terry Graham, as well as guitar from Kid Congo Powers (The Cramps, Nick Cave and the Bad Seeds) and bassist Patricia Morrison (Sisters Of Mercy). This is considered by many to be the most iconic Gun Club line-up and was only together for this one album and tour!