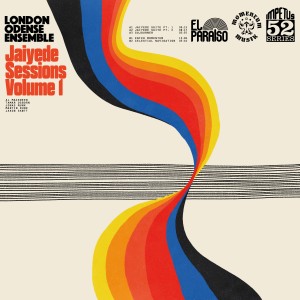 In recent years London has become an epicenter for experimental, visionary jazz. On this unique session, two of the finest exponents of the London jazz scene, Tamar Osborn and Al MacSween, join forces with members of the celebrated Danish psychedelic underground - Jonas Munk, Jakob Skøtt and Martin Rude – to create a heady sonic brew. On this first volume of material there's everything one could hope for in such a collaboration: sonically it summons the free flowing euphoria of Alice Coltrane and Pharoah Sanders' work in the late 1960s and early 1970s.

But there's also a focus on rhythmic energy and vitality that calls to mind the grooviest krautrock or electric period Miles Davis, as well as a healthy dose of electronic experiments. Throughout these five tracks the quintet paints with a colourful palette. Tamar Osborn shifts between baritone sax and flutes. Keyboardist Al MacSween doesn't just stick with the tried and true electric piano - an instrument which he masters - but showers these tracks in analog synths and effects as well. Add to that the fact that Jonas Munk took a somewhat creative approach when editing and mixing these pieces – with effects boxes wired in, occasionally giving the mix a dubby, ambient atmosphere.

Similar to Munk and Skøtt's main project, Causa Sui, digging into the past becomes a vehicle to open up the future. What the quintet has created in these sessions is something quite unique.Bios: Tamar Osborn: Saxophonist, composer and multi-wind instrumentalist is the creative force behind modal jazz ensemble Collocutor (On The Corner Records). She is a member of the Dele Sosimi Afrobeat Orchestra, performs and collaborates regularly with Sarathy Korwar, Jessica Lauren, Emanative, Ill Considered and DJ Khalab. Al MacSween: Keyboard player & founding member of Kefaya.