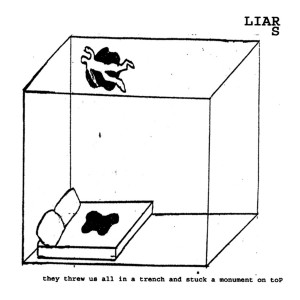 "They Threw Us All In A Trench And Stuck A Monument On Top" is the first instalment of the new Liars reissue series, where every two months an album from the back catalogue will be released on recycled coloured vinyl.

“There's an angular funk core to the tunes, built around insanely brilliant drumming… and they have the most poetic psychopunk song titles out there - the LP's called "They Threw Us All In A Trench And Stuck A Monument On Top”. - NME.

A1 Grown Men Don't Fall In The River, Just Like That
A2 Mr Your On Fire Mr
A3 Loose Nuts On The Veladrome
A4 The Garden Was Crowded And Outside
B1 Tumbling Walls Buried Me In The Debris
B2 Nothing Is Ever Lost Or Can Be Lost My Science Friend
B3 We Live NE Of Compton
B4 Why Midnight Walked But Didn't Ring Her Bell
B5 This Dust Makes That Mud