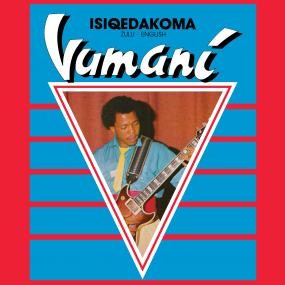 Much in demand album from 1986. Not much is known about the mysterious pop sensation Vumani or his short musical career. Originally from KwaZulu Natal he made his way to Johannesburg in the mid 80’s to follow his dream of becoming a recording artist. He was able to make that dream come true when talent scouts from Decibel Music came across the charismatic youngster. At the time Decibel was still a small fish trying to make waves and the label believed in Vumani they had found the star they were looking for. Being a label with mostly groups signed to the catalog they needed a Front Man to push into the growing demand for Solo Artists that were dominating the airwaves and catching the hearts of youngsters.

Up to this point Decibel had one major hit record. In 1986 they released a single by an artist named David Thanzwane. The music was a direct rip off of the first hit single by Shangaan Disco pioneer Paul Ndlovu. Copying the music of both sides of the original single the covers offered different lyrics and hooks also sung in xiTsonga. This was enough to trick the masses and the single led to record sales for the small label. The unintentional outcome of the single was that from then on the producers and label had one sound they wanted to pump out in hopes of recreating that magic. This desire to create another Shangaan Disco hit would be the backbone of the Vumani sound and what makes his music so special and collectable after all these years.

That same year Vumani would release two Singles, "Black Mampatile" and "Guy Fawkes". Musically these playful and fun singles would have great appeal to youngsters as they sung of daily life in the Townships. Black Mampatile being a game of Hide and Seek, Banana Kari referring to the trucks that would go around the Township exchanging chips and snacks for glass bottles and of course every child’s favourite reason the dress up on November 5th, Guy Fawkes Day. Both singles were received well and a few more tracks were later recorded to create the full album Isiqedakoma. Although he would sing in Zulu the music was unmistakable for Shangaan Disco. The synth heavy bass lines and happy melodies along with relatable fun lyrics were a perfect blend for an album that would make people dance if they were out at a Tavern or Shabeen on a weekend or just enjoying at home with family and friends.

Vumani quickly became the Label’s top priority with managers making sure he always had the freshest clothing styles to go along with his persona, and he never missed any performances or opportunities to impress a crowd. His popularity grew in the Township’s but with that came the unfortunate and all too common problems with fame. He started getting mixed with wrong crowds. He would record another album for Miracle Music, the Decibel sub label that had emerged to focus on the more underground sounds of the post synth pop era. Musically things were going well for Vumani but it would be his life off the stage that would catch up with him. Always known for his commitment to his music and fans one day he uncharacteristically failed to show up and was never heard from again. His body would later be found in a burnt car on the outskirts of Soweto. What led to his tragic death was never known but with the company he kept it is not hard to imagine what one of the many situations that led to that horrific ending could be. His funeral was attended by the entire Township it seemed as people packed the service and flowed out onto the streets, a testament to his popularity and the love the people had for one of their own.

Matt says: Much needed repress of this highly sought after bubblegum centric release from Vumani. One of only four release by the South African cult star, original copies can fetch up to £400! Stick this in yer pipe discogs!