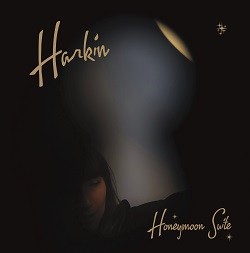 Recorded in a one bedroom flat in the depths of UK lockdowns, the songs on ‘Honeymoon Suite’ are a blend of love, grief, anxiety, resilience, danger, heartbreak and hope. Part pop record, part electronic soundscape, part interior still life, ‘Honeymoon Suite’ will be released on Hand Mirror, the label Harkin founded in 2019 with her wife, the poet Kate Leah Hewett.

Speaking about the video, Harkin said "I was a big fan of Pastel Castle's work and felt like this song would be a perfect fit. I wrote and recorded it during lockdown in a flat with no outdoor space. My brother loaned me a Nintendo Switch and I found solace in games with large maps to explore. Songwriting and gameplay can both have the power to transport and the video Pastel Castle has created takes me on a beautiful and perilous quest."

Adding to this, Pastel Castle commented "The video for 'Body Clock' is a piece of frame-by-frame pixel art animation, which I had the best time making here at my little home studio in Leeds. Many days were focused entirely on tailoring the movement of Katie's Sprite / Avatar to align with the mood of the track. I'm very happy with our collaboration and feel inspired now to go on a bit of an adventure of my own."

The album marks a significant shift for an artist who had previously built a career around collaboration. In addition to her own bands, Harkin has been a touring member of Sleater-Kinney, Wild Beasts, Flock of Dimes, and Kurt Vileand Courtney Barnett’s Sea Lice. She performed backing vocals for Dua Lipa on Saturday Night Live. She dueted with comedian Sarah Silverman on 'Tiny Changes: A Celebration of Frightened Rabbit's The Midnight Organ Fight'. Her studio work includes contributions to Waxahatchee’s 'Out In The Storm'. Outside of the music world, Harkin has composed for Turner Prize-winning artist Helen Marten and British comedian Josie Long. She even has a Saturday Night Live sketch named after her (Fred Armisen’s 2016 ‘Harkin Brothers Band’).

Where her self-titled first record is infused with the expansiveness which birthed it - written and recorded while touring the globe - ‘Honeymoon Suite’ is an entirely different affair. The album was written in the same room in which Harkin and her wife ate all their meals, held their virtual wedding reception and attended a funeral over zoom. As Harkin describes it, ‘Honeymoon Suite’ is “a ship in a bottle of that time”.

The album takes its title from the couple’s affectionate nickname for the flat they found themselves living in after relocating from their then-home in Hudson, New York, where Harkin’s wife was working as a live music promoter until the pandemic was declared. When it became obvious that they would both be out of work indefinitely, they joined many others heeding the call of their home nations to repatriate. In addition to that frenzied move back to the UK, the couple’s planned wedding also took a hard left turn. They had intended to hold a wedding for 150 in September 2020. Instead, they got married in a small, outside ceremony in front of their bubbled parents and siblings. They were married in the Derbyshire village of Eyam, coincidentally famous for quarantining itself during The Bubonic Plague. The flowers in the image on the album’s back cover are their wedding bouquets. “I followed a YouTube tutorial and made our bouquets out of the wedding flowers our friends sent us. We didn’t take a honeymoon and still haven’t. Instead, the flat in Sheffield became our honeymoon suite.”

The album’s DIY ethos continued through its artwork. “Kate took the cover photo and designed the layout. She also designed our original wedding invitations so it felt apt.”

The album also marks Harkin’s first forays into self-producing, a journey she began immediately after her move back to the UK. At that time, her best friend, cinematographer Ashley Connor, asked her to create the soundtrack for an experimental short film she was making for Sam Abbas’ quarantine movie ‘Erēmīta (Anthologies)’. “I’ve worked in all manner of studios and assumed many different roles in music making. I had thousands of flight hours but I had still never been the pilot. Owning the role of producer was more of a mental block than anything else, but circumstance dissolved that intimidation. Working on Ashley’s soundtrack early in the pandemic gave me the confidence to continue producing my own solo work. I won a grant from the PPL Momentum Accelerator Fund which would cover the mixing and mastering if I could be self-sufficient in recording. It felt like the quest I needed to push me into discovering this new direction.”

In terms of instrumentation, ‘Honeymoon Suite’ is more electronic than Harkin’s previous work and this too was for largely practical reasons. “Kate took a remote call centre job when we first got back. This meant we were in the same room, her taking customer service calls and me working on the album. The flat was also above a pub, so I had to record strategically. I’d program drum machines and synths in the day, record guitars in the evenings over the din of the pub-goers, and I’d squeeze vocals into the quiet weekend mornings.”

Indeed, most of the tracks on ‘Honeymoon Suite’ emerged out of synth drones, a refuge for Harkin during the weeks at a time that she didn’t feel like bursting into song. “The album’s glitches and degrading samples reflect the limitations of the digital intimacy we were all relying on during that time as we literally phoned it in.”

Harkin freely admits that the enormity of the task was no walk in the park for the first time producer. “Being my own mirror was ego-crushing at times; I knew these songs deserved extra gusto that I had to outsource.” That’s where the brass by Nate Walcott (Bright Eyes) and Aaron Roche (Lower Dens, Sufjan Stevens, Anohni, Flock of Dimes), slide guitar by J.R. Bohannon (Torres) and backing vocals by Sophie Galpin (Soft Lad, Self Esteem) came in, sent down the wire from their respective homes. It was even mixed and mastered remotely (mixed by Jeff T Smith in Leeds and mastered by Guy Davie in London).

As Harkin puts it, “for me, this album was a rabbit hole and escape hatch. It’s a very vulnerable record. There are no performances - I made it alone. Releasing it into the world feels like an extension of the solitary process and remote collaboration which created it. I hope it travels far and wide.”