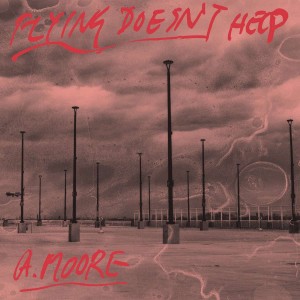 40-plus years since its original release, the pop-punk-new wave inventions of Anthony Moore’s ‘Flying Doesn’t Help’ are freshly remastered, blasting the sparkling, angularsounds into today with perfect vitality.

After spending the early years of the 1970s making experimental music first as a soloartist, then with Slapp Happy and Henry Cow, 1976’s ‘OUT’ sessions had reinvigoratedAnthony’s youthful love of the naive pop melodies of pop radio, the undeniable excitementof songs. While ‘OUT’ ultimately went unreleased at the time, the iconoclasm clouding thelate ’70s air was addictive and transformative for Anthony.

England seemed to be roiledas violently as it had been in counter-cultural days a decade earlier; the UK pop chartsbreathlessly reflected the changing spectrum with equal parts aging hippie and progdelicacies alongside new ascendant sounds: rough-hewn pub and punk rock, plus dubreggae and disco and ska and Stiff and Krautrock. This proved to be an ideal environmentfor Anthony to make records by exploring, as he puts it, the“deep connection betweenminimalism, repetition, working with tape and celluloid and forming the modules of athree-minute pop song.”

Rather than recreate the conditions ofthe original release of ‘Flying Doesn’t Help’, this reissue instead embraces the changedenvironment of the current time and place: instead of no credits, now they are complete,with Anthony’s full name restored and even the artwork subtly ‘relocated’ to reflect a newset of relationships. All of which brings the forward-looking sounds of ‘Flying Doesn’t Help’into the more independent-minded 21st Century syntax where it belongs.