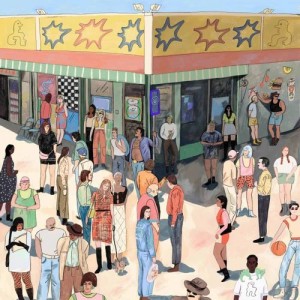 ’The band brings out instrumentation and vocal melodies that are of the same lineage as more modern indie bands like Parquet Courts and Ought. “ POST-TRASH

Indeed, Lawn's sound is a marriage between two different songwriting approaches that make both members step out of their comfort zones without losing their bearings. The result is a partnership that thrives in exploring how their differences make them a solid unit. DeMagalhaes and Folger are different, but never at odds.

After approaching their second full-length with a sense of ease and composure, New Orleans' Lawn found themselves embracing a sense of urgency for their follow-up work, Bigger Sprout. Written, rehearsed, and recorded under a month-long period, Bigger Sprout explores a feeling of urgency as a theme and a catalyst: urgency to get out of uncomfortable situations, urgency to take relationships more seriously, urgency to work on themselves, urgency to play shows again, urgency to record, urgency to start a family, urgency to make plans and leave old settings behind, urgency to grow up and become more in tune to your surroundings, urgency to quit old habits and pick up new ones. The EP, co-written with former drummer Hunter Keene, is a document that embodies the anxieties of change, for better or worse. This idea is juxtaposed by including a remastered version of Big Sprout, their first-ever release, as side B. Big Sprout, which was also written and recorded over a short period of time, has never been released in any physical capacity. The inclusion of these songs provides a contrast into who the members of Lawn were in their early 20s against who they are now.