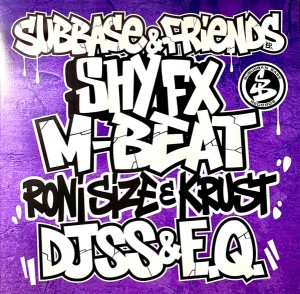 More of Suburban Base's much needed repress campaign here as this crucial UK label revisits some of it's era-defining moments.

Shy FX's remix of Remarc's "In Da Hood", from 2005, is the quintessential jump-up bad boy. Farting B-line, rapid fire breaks and a stripped back, uncomplicated arrangement that occasionally blasts some ravaging amens into the mix as well; it cements that mid 00s, Digital Soundboy style with lashings of panache.

Dating back 10 years previous, is "Want You Now" remixed by DJ SS & E.Q.. Perfectly exemplifying the creative period between hardcore and jungle; the 4/4 energy jarring for attention amongst the rapid fire break beats and drum manipulation. This was the collective sound of the UK losings its shit across under motorway bridges, disused buildings and warehouse parties as the more glamorous side of dance music headed to the clubs.

On the flip drum and bass ambassadors Roni Size & Krust tear apart Boogie Times Tribe's "My Soul"; rolling out darkside breaks, tense soundscapes and drum patterns that sound like a a rickety old cart barely keeping on the rails on a lost Donkey Kong country level. Ridiculously ahead of its time when released in 1994, you can clearly see the evolution of what would becoming techstep or neurofunk in this track.

Finally. seeing things off with pure raggamuffin vibes is QBass featuring Skeng Gee and "Gun Connection" the M-Beat remix; with it holding an expansive history of collective dancefloor trigger fingers since its initial release in 1993.

Absolutely huge repress from Suburban Base!

Matt says: Much needed repress of some of Suburban Base's most pivotal releases. Essential hardcore / jungle ruffage from one of the scene's leading stables.