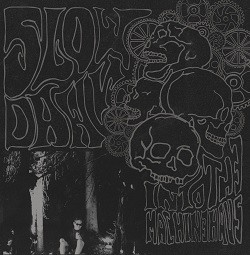 Slow Dawn is from Ottawa, Canada and have spent the past few years honing their craft with a series of self released titles, including 2020’s Experimental Farm, a rather angst-ridden and raw display of sonic power. They are led by guitarist Dan Druff, formerly of Holy Cobras, and are rounded out by Chris DiLauro on drums and Jesse Winchester (Masss) on bass and synthesizer. The band draws influence from the darker edges of the musical spectrum and places a majority of their energy on filling empty voids with as much sound as possible. Slow Dawn is a cacophony of reverberating distortion, swirls of echoing vocals, droning horns, and a steady din of plodding drums. Whether it’s Ottawa’s grim and cold winters or simply a sign of the times, the band’s sound is quite dystopian and is marked by a sense of solemn minimalism. It would be safe to say that with Slow Dawn, the glass is rarely half full.

With six songs clocking in at about 22 minutes, Into the Machine Haus moves quickly and efficiently through a range of territories that include post-punk, psych, krautrock, noise, and even a little bit of goth. It’s a unique amalgamation of sound that demands attention. The band’s influences are easily read but integrated in a way that they escape the dreaded “sounds like” tag. And, to their credit, there are no wasted moments or frivolous meanderings. Their approach is straightforward, primal, and succinct. In the case of this album, less is definitely more. (Mike Mannix).