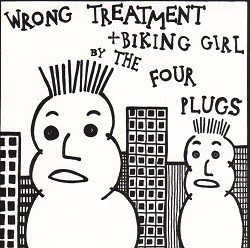 Originally released in 1979 on their own Disposable Records, this record was the brainchild of John Irvine in the UK. The record was pressed in a tiny edition, was played on John Peel several times and vanished without a trace. An excellent example of the UK DIY scene of the time later popularized on the Messthetics compilation series. It ranks number 12 in the top 100 DIY singles list that ran in Ugly Things issue #78. We’ve repressed it in an edition of 400 on red, purple, double mint green and olive green vinyl.