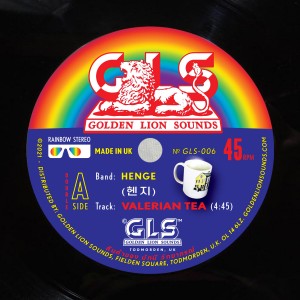 Number six in the highly collectable Golden Lion Sounds series - featuring artists and friends of the iconic Todmorden based hub and released on limited edition vinyl. A true treasure and curio of Yorkshire musical and cultural history!

Manchester's Henge take over side A with a jaunty, indie-psyche number. Guided by a waspy synth motif and marching drums, it's as reassuringly eccentric and grooving as we've come to expect from this bunch of noisy weirdos.

Speaking of weird and wonderful, anyone who's witnessed Tirikilatops crazed live show will enjoy "Tomato", which captures all the quirky Korean-influenced madness over a kinda Eurodans / K-Pop hybrid which reflects the luminous colour palette of the 7"'s center label and somehow manages to align itself with International Teachers Of Pop and recent outings by Confidence Man all at once!

The Lion roars strong once more!! Stupendously limited copies, will sell out pronto!