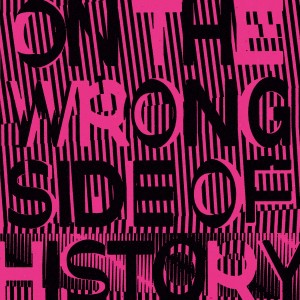 In dark, troubling times, maybe the most instantly gratifying solace one can seek is a wittily barbed diagnosis of the situation. “The fox has his den. The bee has his hive. The stoat … his stoat-hole,” Stewart Lee once remarked: “But only man chooses to make his nest in an investment opportunity.” Caustic retorts like this are what fuel the debut EP by dance-punk outfit Regressive Left, ‘On The Wrong Side of History’. For pervading through their dynamic and glitching music is a duty to report unflinchingly society’s ills. They are a staunchly political group, but far from your average po-faced by-numbers punk band. There is a gristly social commentary at the band’s core, but the songs themselves are characterised by a need to have fun, to find some kind of solace and escapism from the inevitable rapture.

Recorded over an intense 5-day spell with in-demand producer Ross Orton (Arctic Monkeys, MIA, Amyl and The Sniffers) in Sheffield, Regressive Left’s debut EP ‘On The Wrong Side of History’ was immortalised over a handful of 11am-1am sessions in his studio. In many ways it is a time capsule of the maelstrom of ideas that got the group to this point in the first place – the infuriating, bleak political climate, and the urge to find escapism from it – consigned to vinyl in one herculean effort. Taking influence from the booming post-punk, funk and disco scenes of New York, Regressive Left’s sound is stark and danceable. Angular guitar scratches meet dirty synth basslines, whilst Simon Tyrie’s Edwyn Collins croon is chased around by effervescent drums. The banal horror of life in Tory Britain expressed with sharp and dry wit, and then set to truly barnstorming and infectious dance music

Due out July 15th on Bad Vibrations Records, the new EP arrives following a trio of acclaimed singles (‘Eternal Returns’, ‘Take the Hit’, ‘Cream Militia’), tours with the likes of Bodega and Folly Group, festival appearances at End of the Road, Latitude, Great Escape and Wide Awake, and a sold out headline at The Windmill.