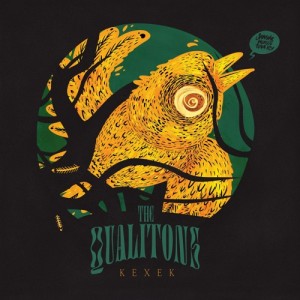 The Qualitons are one of the few internationally known and critically acclaimed bands Hungary has had to offer in recent years.

They played at numerous festivals across Europe and the USA, performed a live session at legendary indie station KEXP and have released a total of four albums.
Their last LP called “Kexek” is a beautiful and respectful tribute to the music of KEX, one of the most legendary, interesting, and tragic bands of Hungarian music history.

Their avant-garde performances were ahead of their time (especially in communist Hungary) and resulted in brutal repression from the authorities. They could release only one official single before they were literally smashed by the police, to save his life, key figure Janos Baksa-Soos even had to flee the country.

The concept of the “Kexek” album was simple: each member of The Qualitons picked one KEX song which they had full creative control over, they re-arranged, mixed them individually and then recorded the tracks together.

What came out of this process is a unique, yet consistent mix of folk, psychedelic, and progressive funk-rock that gets more exciting with each listen.

The LP is limited to 500 copies worldwide.

Matt says: Incendiary in parts, deliciously funky and melodic in others, The Qualitons are a singular and rebellious force. A psych-rock, funk rampage; sung in Hungarian and containing some exquisite musicianship. If you dug Tinariwen, Goat & Koudede - this is for you!