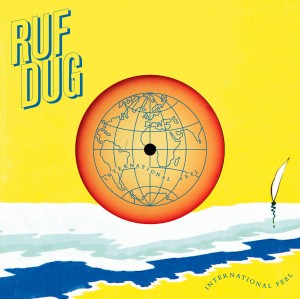 Manchester producer, DJ and dancefloor spirit guide Ruf Dug gets fruity on his Korg DW8000, for this homage to Manctalo pioneers Red Laser Disco who have revitalized the Italo sound over the last decade. Given that Ruffy lives on the same street as Red Laser head honcho Il Bosco it’s unsurprising that his latest release is heavily influenced by his noisy neighbour’s antics.

Manctalo Beach has gone through several versions over the years to arrive, like a chilled Bianco, at the crisp beauty you hear today. Packed with chunky bass arpeggios, pixelated pitch-bent melodies and freeze-frame drum fills, the A-side conjures images of coastline sunsets and waterski waves. Meanwhile on the flip, the bonus beats proceed in a more dubbed disco direction, with acres more space, cascading delays and tripped-out breakdowns. One for your speedboat!

Matt says: Local cyberpunk and superstar, Ruffy pays tribute to Red Laser via an inspired single complete with killer dub version. The clue's in the title! ;)