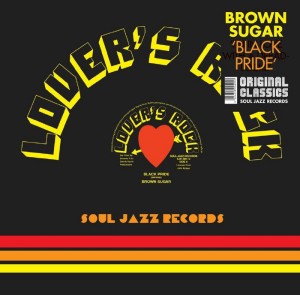 ‘Black Pride’ is the seminal Lovers Rock tune from Brown Sugar, pressed loud for the first ever time on this new one-off press edition 12” on Soul Jazz Records.

‘Black Pride’ was originally released on the Lovers Rock label, a fledgling reggae label formed by musicians Dennis Bovell and John Kpiaye and producer Dennis Harris. Brown Sugar were unique - not only were they one of the most important of the first wave of lovers rock groups, they were also the only group who managed to successfully blend together a reggae roots consciousness with a lovers rock sensibility. The classic ‘Black Pride’ perfectly reflects this unique sound.

Martin says: As lover's rock fever takes over one of the seminal hits of the genre is given a timely repress from the good folks at Soul Jazz

A. Black Pride
B. Proud