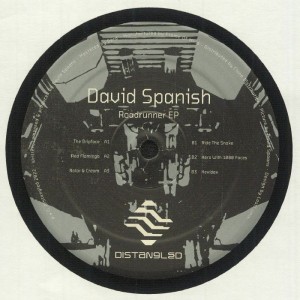 Distangled brings us this re-issue of the highly sought-after house & techno EP called "Roadrunner" by Dutch producer David Spanish. Originally released in very limited quantities back in 1996, this record now changes hands for quite some cash. The tracks off of the Distangled release are re-mastered from the original master tapes and the EP includes 3 previously unreleased tracks. A very versatile 6 tracker which glides through static-riddled dub techno, hard acid and funky, tribal styles. It's mega cos all six tracks are highly playable across the course of an evening. Jeff Mills used to boast about how he'd only buy records were at least 2 of the 3 cuts were playable - so here you're getting maximum techno coverage for just one entry into your record box - back of the net!

Matt says: Tasty techno re-ish of a lesser known Dutch EP that's lay pretty undiscovered till now. The kinda shit that'd go off at Tribal Sessions and Sequence back in the day; a lot of modern clubland forgets how fierce and tribal it used to get. Feathers n face paint tackle.