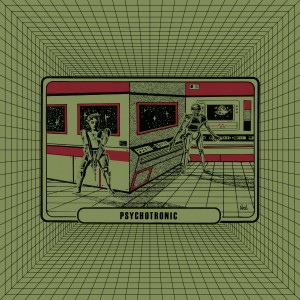 You could write several pages about the “Psychotronic EP” and still not nail it as well as Discogs user covert_operative's description of 'urban, British psychedelic music.' The Acid House narrative is all about ecstasy, but for many, especially outside of London, there was a lot of LSD involved. Things were edgier, too, with parties in derelict, liminal spaces. By the time this record came out in 1991, the rave was properly diverging from its house music beginnings.

The “Psychotronic EP” was the first release on the legendary Moving Shadow label. Its lead track “No Idea” is both the perfect entry point to the catalogue and something of an outlier. Neil Sanford had been writing music for a few years before playing some demos to Rob Playford in his car outside a nightclub in Wood Green. Simon Carter got involved, and the pair went to Playford's studio to manifest the madness they'd been sketching with rudimentary gear.

“No Idea”’s use of samples was wholly inspired and far more surreal than so many of the dark-side tracks that were to follow it. A friend of Neil's had given him a record called “Happy Monsters” and the lead track, “Adventures in the Land of Ooog” lent the unforgettable children's vocals. Neil initially had his doubts. Had they gone too far? However, while working on the track, Rob Playford's girlfriend ran in shouting, ‘you HAVE to use that!’ And so it came to be.

As a footnote, the track did prove to be strong medicine, with at least one documented account of a promoter having to be talked down by his friends after hearing it when psychedelically altered.

The “Psychotronic EP” is a truly visionary piece of work, standing poised on the edge of the rave's burgeoning future and entirely outside it. As such, it's never not been a cool record, as appealing to lysergic adventurers as it is to house heads, hardcore ravers, or experimental music pioneers. And it has now been lovingly reissued by Blank Mind, for which I'm eternally grateful, seeing as my copy is battered beyond belief.

Matt says: Mystic and fabled repress of this early warehouse music high watermark. A brilliant story backed by a brilliant piece of music - what's not to love?! And now available to all for a limited time. Move quick!