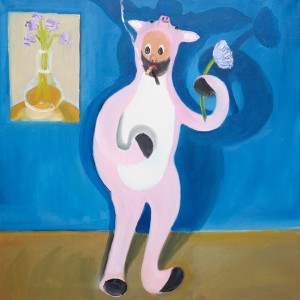 Listening to the dissonant, hallucinogenic world of pigbaby feels like sinking deeper into the artist’s subconscious. His introspective bedroom folk draws together the most surreal of reference points - from Sinead O’Connor playing the Virgin Mary in Irish film ‘The Butcher Boy’, to the online reality game ‘Second Life’, to random YouTube videos of people fighting - to imply a doomscrolling, daydreaming mind.

Pieced together on a small keyboard during a period of intense isolation, pigbaby has formed a picture of digital chaos, longing, and loneliness on his debut EP, ‘Palindromes’.

The artist behind pigbaby grew up in Ireland, where he spent a lot of time in a record shop in Dublin. His earliest musical education came from listening to his grandad playing the mandolin as he sat on his knee, or his mum blasting Thin Lizzy. The musical loves that can most clearly be heard in his own songs are Daniel Johnston and Jim O’Rourke - experimental, ambient singer-songwriters who deal in rough-edged truthtelling.

In crafting these off-kilter musical collages, pigbaby called in friends and asked them to add saxophone, piano, some Irish folk-indebted violin, and a Swarsangam, layering these diverse sounds with scraps of internet ephemera and his own field recordings. The finished EP caught the attention of Joe Thornalley, aka Vegyn, who leapt to release them on PLZ Make It Ruins.

In The Movies
It’s A Long Way Down From Here
Palindromes
Tá Mé Ar Muin Na Muice
I Don't Believe In Jesus But Three Grams Of These Mushrooms Is Making Me Feel Some Kinda Way
Why Don't You Stay, For A Moment