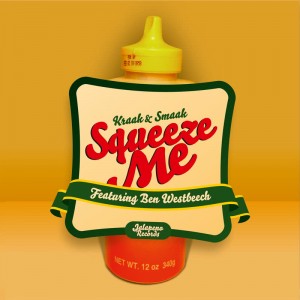 Squeeze Me (feat. Ben Westbeech) marked a turning point for Kraak & Smaak who, until this song had been released, were slowly but steadily building an underground fanbase from their Leiden base in Holland. The single and its ground breaking video got them a ton of worldwide attention with the likes of Kanye West and Perez Hilton (big at the time – look it up) sharing and posting about it and ultimately lead to the band signing a US record deal with Ultra Records and them becoming a successful touring band stateside. It remains an enduring club track and has been used many times on film & TV. The flip side Bobby & Whitney is a funky as hell Kraak & Smaak classic (written before the untimely demise of Ms Houston btw..) and makes this an extremely desirable 7" acquisition.

Millie says: Ultimate funk landed here in the shop, Kraak & Smaak nail it yet again its no wonder that they've finally got the recognition they deserve. Sink your teeth into these two absolute bangers!