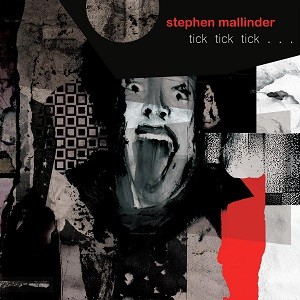 Cabaret Voltaire co-founder Stephen Mallinder’s second solo outing for Dais further distills his signature fusion of minimal synth, oblique wordplay, and “wonky disco” into a riveting rhythm suite ripe for our age of escalation: tick tick tick. Channeling the temporal malaise of lockdown through a lusher palette of modular electronics and stereo strings, the songs embrace ambiguity and plasticity, loose systems of percolating circuitry and airless funk. Recorded across a handful of sessions at MemeTune Studios in Cornwall with frequent collaborator Benge (aka Ben Edwards), Mallinder cites no guiding aesthetic premise for the collection beyond “cowbell on every track, and entirely no reverb.”

From the first coiled cybernetic groove of opener “Contact,” the album’s spatial dynamics are disorienting and asymmetrical, alternately cold and sensual, opiated and claustrophobic. But, throughout, “rhythm is the default, the bedrock, the building block – even the melodies are rhythmic.” Across 40-plus years of electronic musicianship, Mallinder’s sense of timing and tempo has honed into a rare tier of mastery, limber and fluid but knotted with strange frictions. Shades of Detroit technoid industrial (“ringdropp,” “Shock to the Body”) crossfade into no wavy punkfunk (“Guernica Gallery,” “Galaxy,” “The Trial”), bad trip IDM (“Wasteland”), and jittery vapor house (“Hush”), at the threshold of modes both familiar and foreign.

Lyrically the record is equally evasive, rich with allusions and associative linguistics, surveying liquid notions of societal noise, ecological ruin, art world pretension, and the trials of daily life. But the lack of fixed meaning remains Mallinder’s main muse: “Music should draw you in; lyrics should make you think. Most interpretation is misinterpretation.” This is music of countdowns and comedowns, fleeting pleasures and opaque futures, observing the great decline while dancing on its ashes. Flux is deathless and forever; the rest, illusion: “I will be a constant figure / Flickering a moving picture / Turning in your head forever / Split apart but held together.”