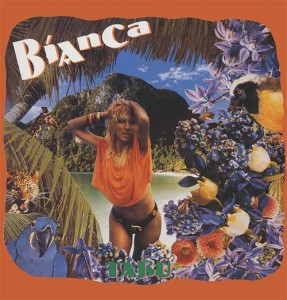 Bianca Binky only ever made a handful of records, the majority of which have long been forgotten by all but the most dedicated fans of late-‘80s European synth-pop and crossover house. ‘Tabu’, her final solo single from 1990, is different: a gorgeous, tactile chunk of piano-sporting Balearic house from the time when dancing under the stars at Amnesia was a rite of passage for clubbers from all over Europe, has undoubtedly stood the test of time. Something of a sought-after classic, with keen collectors willing to spend hundreds of Euros on an original 12Inch single, ‘Tabu’ remains a loved-up, life-affirming dancefloor gem.

It also happens to be a firm favourite of NuNorthern Soul founder Phil Cooper, who has gone to great lengths to produce a deluxe reissue of the hard-to-find Balearic anthem. Original producer Felix B Mangione, head of Blanco Y Negro Records, had long since lost the original master tapes, so Cooper flew from Ibiza to Barcelona to pick up one of of the only mint copies still available, before forwarding high-quality digital transfers on to Robin Lee for remastering.

The results speak for themselves. The original mix, a breezy, sun-soaked fusion of synthesized marimba melodies, spine-tingling piano riffs, dreamy chords, Chicago-style TB-303 bass and Binky’s sensual spoken word vocals, naturally opens proceedings, and is joined on the A-side of the 12” by the original, alternative ‘House Mix’ – more club-friendly version that beefs up the beats, emphasizes the undulating bassline and offers occasional blasts of spacey synth.

This reissue edition also includes an exclusive, never-before-heard re-edit of the legendary ‘Caribbean Dub’ – first featured on the flip-side of the original release – from Manchester’s finest, Ruf Dug. Tough, effects-laden, bass-heavy and positively epic, Ruffy’s version is arguably the ultimate version of a piano-laden, TB-303 driven Balearic house classic: ten minutes of rising and falling, saucer-eyed dancefloor bliss that’s surely destined to be one of the most-played tracks of summer 2022.

Matt says: Is Ruffy on a roll or what? Seems like every week he's delivering either a top drawer remix or a killer new OG. It's the former here as he gets to grips with a rare-as-hen's-teeth Balearic-house monster. Of course the original is included too as part of this unmissable package curated by Phil Cooper.