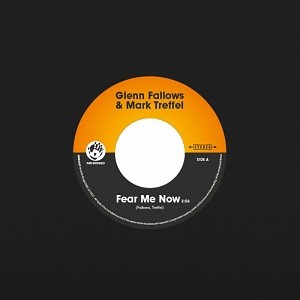 2021 saw the release of 'The Globefower Masters Vol.1' An album released on Mr Bongo and born from the fruitful collaboration between Glenn Fallows (The Impellers / Andres y Xavi) and Mark Treffel (Blue States / The Soul Steppers).Taking inspiration from classic 60s and 70s soundtrack and cinematic composers such as Axelrod, Morricone, Gainsbourg, Jean- Claude Vannier and Piero Umiliani, the album was very well received upon its release and struck a chord with the scene's connoisseurs.

The next logical step was to make their music available on 45 too. The release features an album track 'Fear Me Now' on the A-side and is paired on the B-side with two new tracks that channel the sound of library music giants such as Hawkshaw and Bennett. Three lush, warm and timeless productions.Inspired by classic 60s and 70s soundtrack composers such as Axelrod and Morricone, and library music giants including Hawkshaw and Bennett.

Fear Me Now
All So Simple
Slurred And Blurred