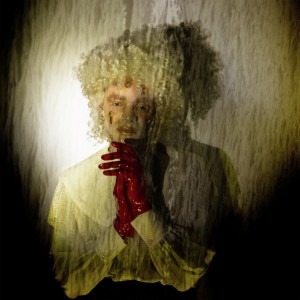 Scrutiny, the debut album from Moaning's Pascal Stevenson under her new solo alias Fashion Club, explores the mind's complex relationship to morality, and the way structures of power tend to replicate themselves through unexamined habits. Stevenson began writing the songs that would become Scrutiny toward the end of 2018, as Moaning embarked on a European tour in support of their critically acclaimed first album. Between shows, in the back of the band's tour van, she traced early drafts of Scrutiny's instrumentals on her laptop, planting the seeds of what would bloom into her captivating solo debut.

While concocting Scrutiny's dreamlike art-rock palette, Stevenson drew inspiration from artists working during the incipient decades of the synthesizer’s lifetime, like Kate Bush, Brian Eno, and Wire's Colin Newman –
musicians whose work bridges the gap between disarming experimentalism and pop pleasure. The album similarly channels the influence of Jimmy Jam and Terry Lewis’s tactile, material production on Janet Jackson’s late ‘80s albums Control and Rhythm Nation 1814, records that exploded the potential of digital music-making and entwined the sounds of new technology with the currents of the body.