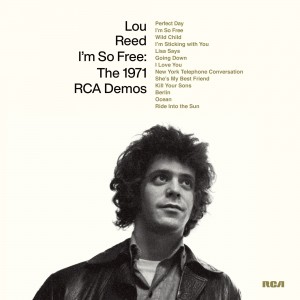 On October 27th, 1971, Lou Reed walked into the first recording session of his solo career. I'm So Free: The 1971 RCA Demosis a collection of those rare recordings. This is Reed as few have ever heard him: the songwriter at work, pure and alone, before the noise, swagger and legend. Released on vinyl for the first time, the 13 tracks on this LP are an unprecedented addition to Reed's rock & roll life on record.

His next four decades - more than 30 studio and concert albums of lyric challenge, incendiary guitar and iron-willed vision until his death in October, 2013 - start here.

The final iteration of these demos can be found across Reed's discography including S/T, Transformer, Berlin, and Sally Can't Dance.