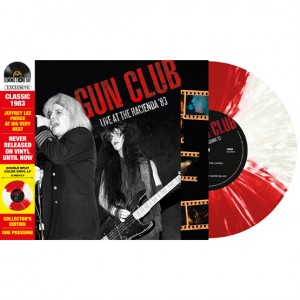 This recording has NEVER been released on vinyl. Led by the charismatic late/great frontman Jeffrey Lee Pierce... The Gun Club are hailed as the initiators of the "US wave of cow-punk". Live At The Hacienda '84 has only been released on DVD and NEVER on CD or vinyl. This cult US band "trod the boards" at Manchester's Hacienda in 1984. Their 13-song set captured for posterity was not released on DVD untill 1994 and now being released on vinyl for the first time in 2022 as a Record Store Day limited edition exclsuive. This deluxe package will include an OBI strip, double album jacket, printed inner sleeves, record labels and a "Quatdro" Red & White Splatter vinyl. Limited QUADRO RED & WHITE SPLATTER Vinyl