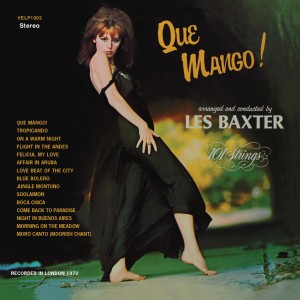 LP, green vinyl, It's 1970, and famed Exotica composer Les Baxter is tempted back into the studio to record an album that marks his return to the genre that defined his fame. The resulting release, Que Mango!, is an album that perfectly captures the exotic spirit of the 50's and yet enhances that spirit with small sparkling glints of the 60's Surf movement, and the 70's Funk rising.

Now considered something of a "lost classic" of Baxter's work, the album finally gets a deserved re-issue for RSD 2022 Much had happened in-between Baxter's iconic Ritual Of The Savage LP from 1951 and Que Mango!, he was a much in demand film composer during the 1960s and the skills that he had honed in the intervening years allowed Baxter to make a triumphant return to the Exotica style and produce an album so colourful and vivid that it would have blasted everything away, had it been released in the late 50's. This release is remastered from the original tapes, is presented on coloured vinyl, and includes some carefully selected bonus tracks."

The MyrrorsBlack Sand : Live In London

Guided By VoicesYou Own The Night