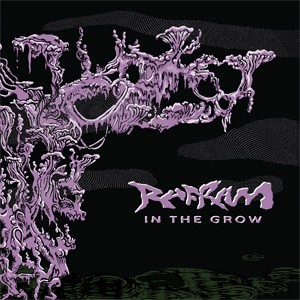 Orphic Apparition is a new label born out of a transatlantic meeting of minds. Facilitated by a long, hedonistic party in one of present-day London’s ‘meanwhile use’ venues Grow Tottenham, Canadian producer Raf Reza and British acid house luminary Paul Chivers spent a precious day in the studio to record a 3 hour straight to DAT session before Reza's return to Canada. The result of this spontaneous yet intuitive collaboration blurs the lines between Chiver’s long-standing Ramjac Corporation alias and Reza’s genre-spanning approach to dub, breaks and house styles. Part of the early 90s rave scene and an important member of the blueprint-setting Irdial label, Ramjac locks heads with the self-professed ‘lazy music guy from Toronto’ to adapt their studio session into five separate mixdowns.

‘In The Grow’ begins with a bouncy, cut-up sounding Errorsmith-esque rhythm, the recurring fright night melody that distinguishes the record coming in all quick and powerful. The A2 ‘Rotten Mix’ offers a more traditional house approach in its composition, with dub FX and a nice DJ friendly outro. On the final uptempo choice the pair opt for a head-scrambling electro take. Choose your fighter! The ‘Swampy Dub’ on the flip really dismantles everything we’ve heard prior, slo-mo drums allowing a much different DJ experience and altering the freaky synthetic propulsion into an almost modern classical sound. A little like Paul Dresher’s eternal ‘Channels Passing’ (tip). Combined with the other edits this version almost becomes a totally different track. The final ‘Rootless Dub’ gives its clues in the title, removing all the tough drum sounds and allowing for an ambient decompression.

Matt says: Leave the sludge in the warehouse long enough and it mutates into new lifeforms off of all the sweat and ecstasy still circulating around the vicinity. The results are mutations of acid, bass, rave and dubstep into one end-level bossman warehouse killer. You'll need a pocket full of power pills to fend off this beast!