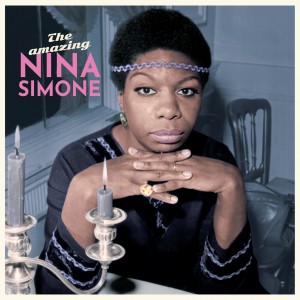 Released in 1959, The Amazing Nina Simone was Nina Simone's first album for Colpix Records. In contrast to her debut album 'Little Girl Blue' (Bethlehem Records), which highlighted her piano playing as well as her singing, this production downplayed the piano in favour of string arrangements. The production also featured a variety of material, including jazz, gospel, and folk songs. NINA SIMONE, vocals & piano with orchestra conducted & arranged by Bob Mersey. New York, May 1959. Produced by Hecky Krasnow. Bonus tracks: from the same sessions, but not included on the original LP: I Loves You Porgy; Falling In Love Again; That's All; The Man With a Horn. Plus: My Baby Just Cares For Me (Bethlehem Records) featuring Nina Simone, vocals & piano; Jimmy Bond, bass; Albert "Tootie" Heath, drums. New York, December 1957 AllMusic: "There is a remarkable amount of variety on this disc, Nina Simone's second recording. She does not play much piano (just cameos on two songs) and is backed by a subtle orchestra arranged by Bob Mersey that is effective accompanying her vocals. This session finds Nina Simone's voice in top form and with a few exceptions is generally jazz-oriented." (Scott Yanow)