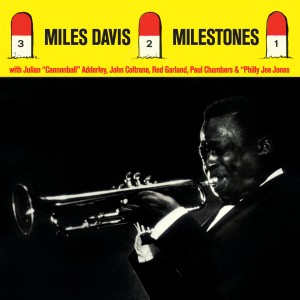 Milestones represents what many consider to be Miles Davis' first great quintet. Released in 1958 on Columbia, the five-star review by AllMusic's Thom Jurek called it ".. a classic album with blues material in both bebop and post-bop veins.which introduced modalism in jazz and defined Davis' subsequent music in the years to follow." A precursor to 'Kind of Blue', 'Milestones' was the first session to feature John Coltrane and Cannonball Adderley. DOWN BEAT (1958) "Davis' statements here are genuinely eloquent. Coltrane's efforts here do indicate that he is rapidly moving toward a niche of his own, absorbing influences but not being obsessed by them. Adderley is less than individualist but is performing on a level of fluency which will make the discovery of a self-sustaining role less difficult in time." (Don Gold) MILES DAVIS, trumpet JOHN COLTRANE, tenor sax JULIAN "CANNONBALL" ADDERLEY, alto sax RED GARLAND, piano PAUL CHAMBERS, bass PHILLY JOE JONES, drums. New York 1958. Produced by George Avakian