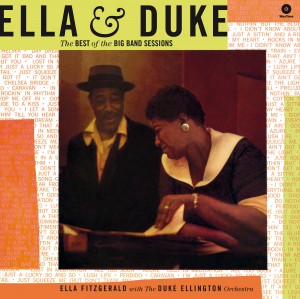 Duke Ellington and Ella Fitzgerald's paths had crossed many times during the Thirties, Forties, and early Fifties, but no recorded trace of the two legendary musicians collaborating existed until 1957, when they would come together to produce a series of sessions which include the music on this LP.

It may seem incredible that not a single previous air shot of Ella with Ellington survives, but Duke had a tight band and didn't frequently play with musicians outside of his orchestra. Ella, on the other hand, after coming to fame with the Chick Webb orchestra in the late Thirties, was taken under the wing of Norman Granz's, from which point on she rarely recorded with anyone other than artists contracted to Granz, which included many of the greatest jazzmen of all time. Because of Ellington's contractual commitments and incredible busy schedule, the sessions where fraught with problems and intermittent delays. Thankfully though, under Granz's supervision and stoicism, the Ella-Duke project was completed.