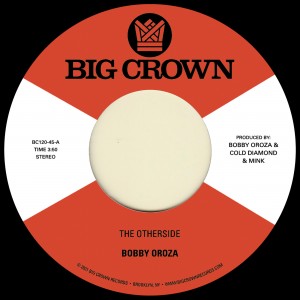 While Bobby Oroza puts the finishing touches on his next album, he treats us to this killer two-sider to end out 2021 and hold us over until the new record is finished. Bobby's debut album "This Love" made big waves around the world and amassed him a cult following from the US to Japan and everywhere in between.

He found big love in the sweet soul scene early, but has since made fans in a myriad of circles and subcultures globally. It has by now become clear that his music is not just one thing, analog soul textured for sure, but also with an array of influences that span far beyond the soul ballad world. It is that inability to really nail down his sound that has become the biggest charm, an esoteric and profound passion permeate the lyrics and vibe of everything about Mr. Oroza.

This new 7" shows off two sides of Bobby's song writing, an upbeat number on the "plug" side and a heavy duty ballad on the flip. The A side "The Otherside" is an optimistic tune that Bobby humbly shares his story about the troubles we can create for ourselves and the possibility of having a change of mind that frees us from them.

The track is equally encouraging with its sunny energy that carries an important message from Bobby to anyone who is struggling and can't see a way out. The B side "Make Me Believe" is another instant classic for the slowie enthusiasts. A moody, soul bearing, cry for help that comes off with a sweet- ness. The vulnerability makes it romantic while the heavy backing track brings it that unique energy that classic B sides have where they are heart- breaking and gorgeous at the same time.

Make Me Believe
The Otherside

Bobby OrozaGet On The Otherside