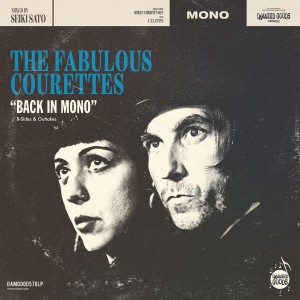 10” Mini LP featuring outtakes and re-recorded B-sides from the 'Back In Mono' sessions!!! Back in Mono, The Courettes´ third album, was critically acclaimed worldwide and made it onto numerous best -of -the-year lists in 2021. If, like us, you can’t get enough of Back in Mono, here's some good news! Back in Mono - B-sides & Outtakes is coming out at the end of May, just in time for the band's UK tour! Bringing some more “spit ´n´ snarl garage-meets-Phil Spector pop” (Mojo) in three brand new unreleased tracks.

Look forward to hearing the three new smash tunes 'Daydream', 'Tough Like That' and 'Talking About My Baby', all wrapped in a new mix by Wall of Sound aficionado Seiki Sato (Japan) and produced by the hit wizards Søren Christensen & C.T. Levine. Also included are the three non-album B-sides from the band's most recent singles. These B-sides have been newly spruced up with extra instrumentation.

Making up the eight tracks is the inclusion of a Courettes rarity - 'So What' was previously only available on a split single with The Jackets released on Chaputa Records back in January.