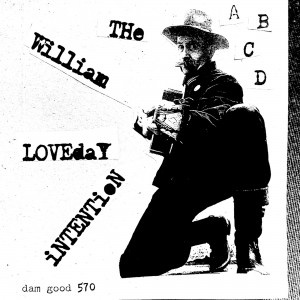 Brand new double 7” by The William Loveday Intention! As part of an incredibly productive year by one of the world's most productive and cherished artists, Billy Childish releases a new EP by The William Loveday Intention as part of his attempt at “a career in a year”. “Four tracks that address the game of being a human being.” 'I'm Good Enough' is a fresh look at Thee Headcoats' classic. 'Failure not Success' speaks for itself - and embodies the quest for un-muddied art. 'Becoming Unbecoming Me' is the story of a Jewish girl in Austria who changed her identity and married a Nazi to escape the death camps. 'Subterranean Homesick Blues' is our version of Bob Dylan's version of 'Too Much Monkey Business' by Chuck Berry.”

The William Loveday IntentionBlud Under The Bridge