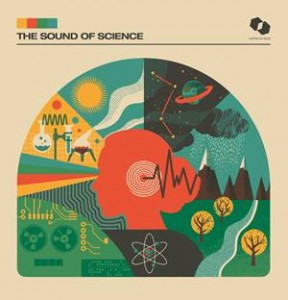 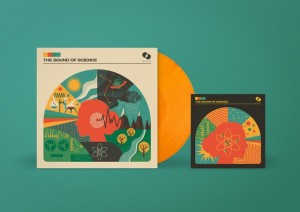 Dean Honer and Kevin Pearce present a beautifully designed original soundtrack of songs taken from a science show for children and adults alike.

Dean Honer is a Sheffield based musician, producer and founding member of many iconic electronic music bands including The All Seeing I, I Monster, The Moonlandingz and The Eccentronic Research Council. He has worked as a producer for bands such as The Human League, Add N to X and Roisin Murphy.

Kevin Pearce is a songwriter from Essex. He has received plaudits for his work from The Independent, The Guardian and Mojo magazine. His music has been used on HBO programmes in the USA as well as BBC TV shows in the UK.

Castles in Space is proud to present The Sound of Science. Dean explains the background and inspiration for the album:

“The idea for The Sound of Science had been in my head for a number of years.

“Being a parent of young kids I endured a lot of very cliched and awful children's songs that were attempting to combine education and entertainment. These quickly became a form of torture to me, something that the CIA might use in covert operations to flush out a drug cartel from their hideout. It became apparent that there was a desperate need for informative songs and music that were appealing and bearable for both children and their parents.

“I recruited my friend Kevin Pearce, (who I have produced and collaborated with on various projects over the years), to bounce ideas off and who could put together a nice series of chords and could sing! Which helps when writing songs. Kevin is from an acoustic folk background and I'm more of a one finger synth player in the Human League tradition. I thought it would be interesting to mix the folk and electronic element together for children’s songs. Something that harks back to both the BBC Radiophonic Workshop in the 60's and 70's and also the folk songs of TV programmes like Play Away, public information films and music from various weird and oddball kids TV from that era.

“Kevin and I are both interested in science and astronomy so that was the obvious direction for the album. Writing songs about various scientific subjects was interesting and a challenge. Aiming them at children meant that we didn't need a PHD for the lyrics. It became more about conveying a sense of wonder and presenting some amazing facts to audience.

“In 2018 we were asked by Sheffield University to work on a live version of the album and to collaborate with some of their senior scientists on the project. This turned The Sound of Science into a live performance spectacular involving scientific experiments on stage, a live band performing the songs, plus 3D visuals created by Human in Sheffield. We performed 3 shows over two days and the reaction from kids and their parents was amazing. More festival shows due in 2020 were curtailed because of the pandemic, but we hope to get the show back on the road in 2022.”

Barry says: An absolutely stunning package here, once again for the ever-brilliant CiS, and a landmark release for their 100th cat no. too! Beautiful kosmische synths, robot vocals and airy arps, bringing to mind Kosmischer Laufer or Panabrite, but imbued with a percussive drive and Hohner-exclusive humour. Really beautiful stuff in sight and sound.

1. Photosynthesis (Love The Green Machines)
2. What Makes Sound
3. Everything’s Made Of Atoms
4. These Are The Elements
5. Global Warming
6. The Water Cycle
7. The Speed Of Light
8. Gravity
9. Nebulae
10. The Planets And Moons Of The Solar System
11. Black Hole (Sagittarius A Star)
12. A Total Solar Eclipse