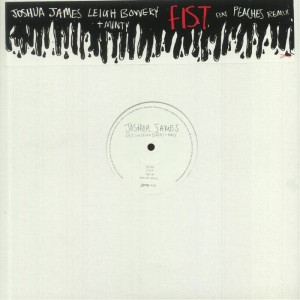 There’s no fairer introduction to “Fist”, Joshua James’ latest contribution to Phantasy, than to advise one simply to prepare themselves. Sampling iconic performance artist, club promoter and designer Leigh Bowery, James connects the expert dancefloor pressure he exacts each weekend as one of London’s best-loved club residents with the unapologetic, defiant legacy of a personal hero. None other than Peaches then takes up the remix mantle for “Fist”, intertwining the provocations of two radical performers and connecting three generations of underground queer culture in one sonic menage-a-trois, perhaps the straight-up rudest club record in recent memory.

On the original production, James shifts his sound in a heavier direction still since last summer’s euphoric “Amber Rush”, which was remixed by labelmate and friend Daniel Avery. A bouncing industrial tilt underscores the heavy-duty production, as Bowery, originally recording alongside Richard Torry in their band Minty, espouses a catalogue of sexual acts - some specialist, all sensational - as James pushes dancers further down into the belly of some revolting rave beast.

A multi-faceted match to Bowery themselves, Peaches continues a decades-long journey dedicated to genre and gender deconstruction with her wild and playful take on ‘Fist’. Dripping in cybernetic club juice, Peaches wraps herself around Bowery’s own teaches on the mic, easily matching his demands as she careens towards a system-rattling techno conclusion.

Matt says: Certain to make even the most potty-mouthed gawp and blush at the lyrical content. I have to say though it works! Think Modeselektor meets Sophie meets Soulwax. Engineered for the big rigs and with a hook so filthy it'll need 3 washes to get outta ya head. I'm expecting a tik tok video to accompany it soon!