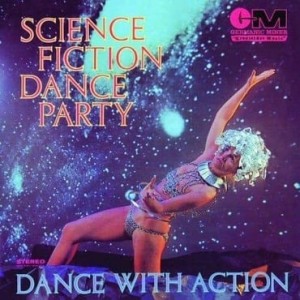 Back in 1968, a pair of Germanic behind-the-scenes sound librarians called Horst Ackermann and Heribert Thusek left a tiny but indelible pinprick on the history of German Pop in the misshaped form of a sexy horror cash-in concept album called ‘Dracula’s Music Cabinet’. Shelved at a micro-cosmic axis where Krautrock meets lesbian vampire Horrortica and easy listening meets psychedelia, the delayed reaction of this mutant concoction eventually exploded in the mid-1990s in the hands of a generation of ‘record diggers’ sending currency-crushing tremors through the wallets of mods, rockers, hip hoppers and psych nuts around the plastic-pillaging planet. The vinyl junkies had resurrected a monster but, like addicts do, they ravenously sucked it dry and moved on looking for the next fix to feed their habit.

Luckily for some, Ackermann and Thusek were also creatures of habit. And it wouldn’t take a genius to figure out that they were holding the next dose, but by the turn of the millennium the mad scientists had been given a thirty-five-year head start on the pop archaeologists and their mythical sequel was literally light-years ahead of their previous draconian instalment. Encouragingly, the unclosed cabinet left a shiny white clue in the form of its closing track ‘Frankenstein Meets Alpha 7’.

The Ackermann and Thusek duo were far from dynamic. They were undercover agents hiding behind user-friendly mock-rock monikers and, like most B-Musicians, the only way to sniff them out would be to read the small print. But when an unidentified record on an unknown label with a title like ‘Science Fiction Dance Party’ crops up in the Eins Deutschmark crates it’s not exactly rocket science - although the track titles might suggest otherwise. ‘The End Of A Robot’, ‘Monster On Saturn 1’, ‘Galactic Adventures Of The Outer Space Fleet’, ‘The Whistling Astronauts’, ‘Death Rays Out Of The Universe’… The tell-tale signs are all there and if that doesn’t clench the deal then what will?

Even rarer than its horror counterpart, this ultra-rare record regularly reaches sums in excess of €400 plus online.

The End Of A Robot
Monster On Saturn 1
Visitors Of A.D 2022
Galactic Adventures Of The Outer Space Fleet “Hope”
Hit Parade In The Light Year 25
The Whistling Astronaut
Murder In The Space Station
Flirtation On Venus
Dance On Mars
Man Out Of A Test Tube
Just Walking On The Moon
Death Rays Out Of The Universe