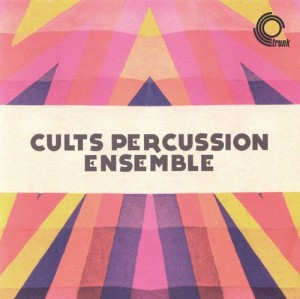 Legendary privately pressed 1979 LP from Scotland. This illusive, super rare and sublimely wonderful percussion album is like no other. Hypnotic, celestial, even cosmic and ambient in parts and totally unique in all ways, it was played by a group of 11 girls with an average age of 14. The group included Evelyn Glennie, who was destined to become one of the world’s greatest percussionists. This is her first ever record.

The Cults Percussion Ensemble was a group formed by percussion teaching legend Ron Forbes in the mid 1970s. The ensemble must have one of the best group names of all time. To many it will immediately come across as something sinister, a touch spooky and possibly a bit dramatic too. They are certainly two of those but the use of the word “Cults” here is easily misinterpreted. Cults, in this case, is the suburb of Aberdeen.
The average age of the students was just 14. They came from a few of the schools in the area, including the Cults Academy, Ellon Academy, Aboyne Academy, Inverurie Academy and Powis.

The music here is really quite unique, with a celestial swirling hypnotic quality. The blend of glockenspiels, xylophones, vibraphones, marimba and timpani drums is quite intoxicating and can recall the shimmering warmth of the desert sun one minute (“Baia”) or freezing glacial ice caps the next (“Circles”). The Ensemble perform with an effortless tightness and deftness of touch, building textured layers with recurring percussive motives which appear simultaneously dense and yet sparse, almost sounding like modern sampling. In fact, while struggling to find a musical comparison, during the pulsating introduction to "Percussion Suite" I found myself recalling "Gamma Player", a piece of soulful Detroit techno minimalism from Jeff Mills (Millsart - “Humana” EP 1995) with its rhythmic percussion layered with complex emotion. Weirdly enough, other tracks on that EP also prominently feature xylophone and tuned percussion, although obviously synthesised and programmed, a good 20 years after the CPE first recorded.
Sleevenotes also include a letter from Ron Forbes:

“I decided to form a percussion group to provide an outlet for my percussion pupils to play music specially written for them. The group soon became well known in the region and as a result of winning the outstanding award at the National Festival of Music for youth on three occasions, they were invited to play at other festivals within Europe, one being in Erlangen in Germany - hence the Erlangen Polka - and Autun in France - hence the Autun Carillon. During these visits we were often asked if we had any recordings and so it was decided to make an LP”.

Thanks to Ron Forbes and Trunk Records, more people can now enjoy the simple hypnotic musical charms of the Cults Percussion Ensemble