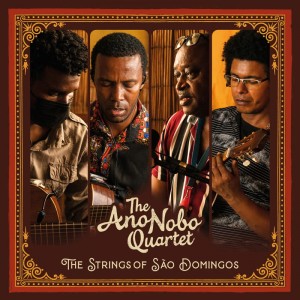 In the small inland town of São Domingos on Cape Verde's Santiago Island, The Ano Nobo Quartet delivers a fresh take on Koladera, a guitar-driven, subtly rhythmic sound of a lighter spirit. Their sound tells a global story with Cape Verde at its center, a creole melting pot in the middle of the Atlantic attracting the best from four continents: hypnotic, haunting Koladera guitars inflected with twangs of Salsa Cubano, Spanish Flamenco, Brazilian Samba Canção, Jamaican Reggae, Argentine Tango, Mozambican Marrabenta, and finished with a dash of Black American Blues. It's all here. Absent percussion, the quartet's sound still drips with rhythm. Rich, raw acoustic music you can dance to.

This album was recorded in three locations on Santiago Island: at homes, by the sea, and on the volcanic hills of Cape Verde. Each location used a mobile recording studio equipped with different mics placed near and far to capture both the Spanish and Chinese-made guitars and the natural environment that shapes the saudade, a melancholic longing, of Koladera. Each space has its own atmosphere heard in the interludes.