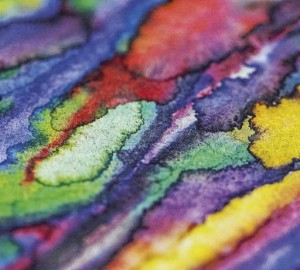 The DiN label via its founder Ian Boddy has its roots in the analogue electronica of the German Berlin School. However over the course of 100+ albums the music released on this UK based imprint have pushed far beyond this musical heritage. The electronic music scene is ever evolving and a new, younger generation of musicians involved in the burgeoning modular synth scene are untethered from the past and able to wander freely into unexplored worlds of sonic soundscaping.

Just such a musician is Polypores (aka Stephen James Buckley) who paints music with a Eurorack modular, drawing influences from ambient, new age, and experimental electronica. His music soars, bubbles, crackles, and soothes, in ever-shifting, immersive cosmic landscapes.

His musical output is both varied and prolific with sold-out vinyl releases on such well respected labels as Behind The Sky, Castles In Space and Polytechnic Youth. Notable live festival performances have included the Castles In Space Levitation event, Manchester's Subliminal Impulse and the prestigious Future Yard in Liverpool.

Whilst Polypores did have a track on the fifth volume of the Tone Science series, Hyperincandescent (DiN71) is his solo debut on the DiN label. Releasing on both CD and Vinyl the music is split between two album length tracks that meander between different sections exploring a micro world of texture and form. At times calm and blissful the mood can suddenly be transformed into something more chaotic with strange, organic twisted shapes emerging from the undergrowth. His ability to play with tempo as a mouldable musical expression is at times breathtaking and highlights quite what a fearless sonic explorer he is.

DiN is very proud to showcase the talents of this quite unique artist as the label forges ahead into its third decade.

Barry says: Stephen J Buckley is a man who refuses to stop, pushing ever onwards in search of the perfect LP, each new album moving further than the last towards that 'perfect' sound. He'll never find it, there's no such thing but every release that comes from the beeping behemoth that is Big Ste's modular rig makes me all the more convinced that if anyone will complete music, Polypores will. A restless and grotesquely talented synth figurehead.